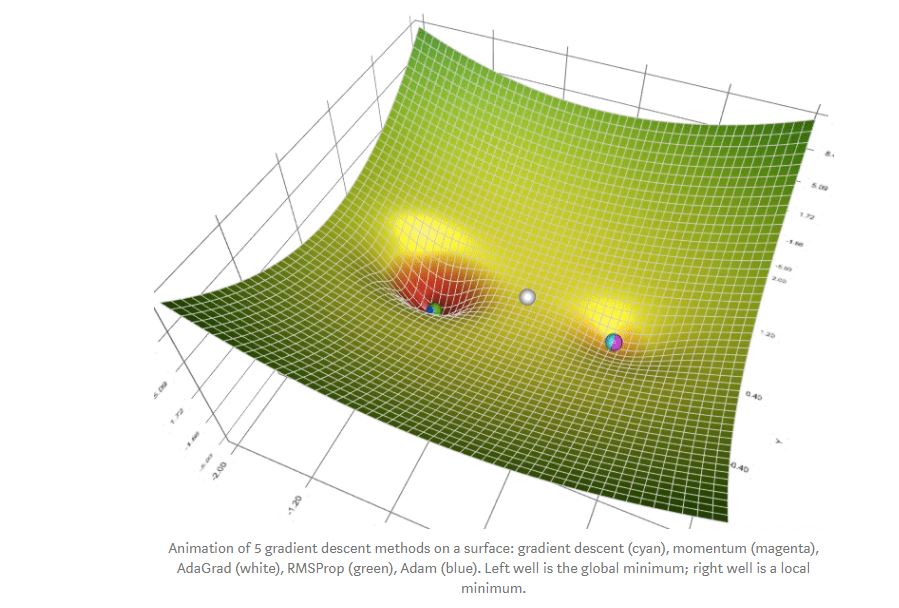 With a myriad of resources out there explaining gradient descents, in this post, I’d like to visually walk you through how each of these methods works. With the aid of a gradient descent visualization tool I built, hopefully I can present you with some unique insights, or minimally, many GIFs.

I assume basic familiarity of why and how gradient descent is used in machine learning (if not, I recommend this video by 3Blue1Brown) . My focus here is to compare and contrast these methods. If you are already familiar with all the methods, you can scroll to the bottom to watch a few fun “horse races”.

Let’s have a quick refresher. In the context of machine learning, the goal of gradient descent is usually to minimize the loss function for a machine learning problem. A good algorithm finds the minimum fast and reliably well (i.e. it doesn’t get stuck in local minima, saddle points, or plateau regions, but rather goes for the global minimum).

Theta is some parameter you want to optimize (for example, the weight of a neuron-to-neuron connection in neural network, the coefficient for a feature in linear regression, etc). There can be thousands of such thetas in an ML optimization setting. Delta is the amount of change for theta after every iteration in the algorithm; the hope is that with each of such change, theta is incrementally getting closer to the optimum. 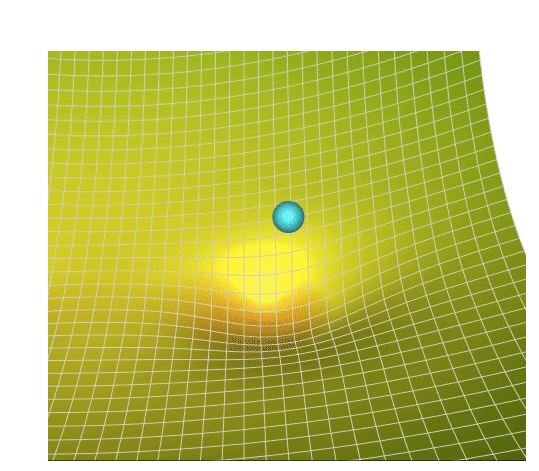 As human perception is limited to 3-dimensions, in all my visualizations, imagine we only have two parameters (or thetas) to optimize, and they are represented by the x and y dimension in the graph. The surface is the loss function. We want to find the (x, y) combination that’s at the lowest point of the surface. The problem is trivial to us because we can see the whole surface. But the ball (the descent algorithm) doesn’t; it can only take one step at a time and explore its surroundings, analogous to walking in the dark with only a flashlight.

The vanilla gradient descent is vanilla because it just operates on the gradients. The following methods do some additional processing of the gradients to be faster and better. 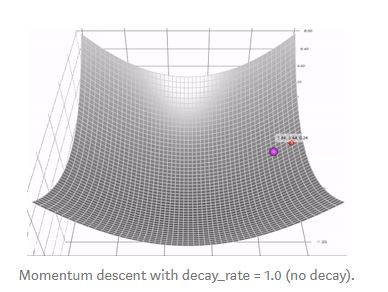 The gradient descent with momentum algorithm (or Momentum for short) borrows the idea from physics. Imagine rolling down a ball inside of a frictionless bowl. Instead of stopping at the bottom, the momentum it has accumulated pushes it forward, and the ball keeps rolling back and forth.

We can apply the concept of momentum to our vanilla gradient descent algorithm. In each step, in addition to the regular gradient, it also adds on the movement from the previous step. Mathematically, it is commonly expressed as:

I found it more intuitive if I massage this equation a little and keep track of the (decayed) cumulative sum of gradient instead. This will also make things easier when we introduce the Adam algorithm later.

(What I did was factoring out -learning_rate. To see the mathematical equivalence, you can substitute delta with -learning_rate * sum_of_gradient in eq. 1 to get eq. 3.)

Step-by-step illustration of momentum descent. Watch live animation in the app. For the rest of this post, I sloppily use gradient x and gradient y in the visualization; in reality, because it’s gradient *descent*, it’s actually the negative of the gradient.

Let’s consider two extreme cases to understand this decay rate parameter better. If the decay rate is 0, then it is exactly the same as (vanilla) gradient descent. If the decay rate is 1 (and provided that the learning rate is reasonably small), then it rocks back and forth endlessly like the frictionless bowl analogy we mentioned in the beginning; you do not want that. Typically the decay rate is chosen around 0.8–0.9 — it’s like a surface with a little bit of friction so it eventually slows down and stops.

So, in what ways is Momentum better than vanilla gradient descent? In this comparison on the left, you can see two advantages: 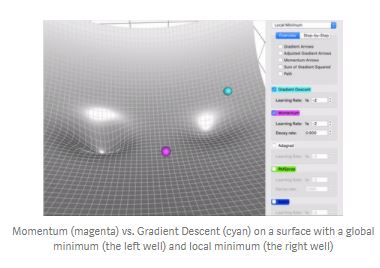 In ML optimization, some features are very sparse. The average gradient for sparse features is usually small so such features get trained at a much slower rate. One way to address this is to set different learning rates for each feature, but this gets messy fast.

AdaGrad addresses this problem using this idea: the more you have updated a feature already, the less you will update it in the future, thus giving a chance for the others features (for example, the sparse features) to catch up. In visual terms, how much you have updated this feature is to say how much you have moved in this dimension, and this notion is captured by the cumulative sum of gradient squared. Notice how in the step-by-step grid illustration above, without the rescaling adjustment (1b), the ball would have moved mostly vertically downwards; with the adjustment (1d), it moves diagonally.

This property allows AdaGrad (and other similar gradient-squared-based methods like RMSProp and Adam) to escape a saddle point much better. AdaGrad will take a straight path, whereas gradient descent (or relatedly, Momentum) takes the approach of “let me slide down the steep slope first and maybe worry about the slower direction later”. Sometimes, vanilla gradient descent might just stop at the saddle point where gradients in both directions are 0 and be perfectly content there.

To see the effect of the decaying, in this head-to-head comparison, AdaGrad white) keeps up with RMSProp (green) initially, as expected with the tuned learning rate and decay rate. But the sums of gradient squared for AdaGrad accumulate so fast that they soon become humongous (demonstrated by the sizes of the squares in the animation). They take a heavy toll and eventually AdaGrad practically stops moving. RMSProp, on the other hand, has kept the squares under a manageable size the whole time, thanks to the decay rate. This makes RMSProp faster than AdaGrad.

Last but not least, Adam (short for Adaptive Moment Estimation) takes the best of both worlds of Momentum and RMSProp. Adam empirically works well, and thus in recent years, it is commonly the go-to choice of deep learning problems.

Let’s take a look at how it works:

Adam gets the speed from momentum and the ability to adapt gradients in different directions from RMSProp. The combination of the two makes it powerful.

Now that we have discussed all the methods, let’s watch a few races of all the descent methods we talked about so far! (There is some inevitable cherry-picking of parameters. The best way to get a taste is to play around yourself.)

In this terrain, there are two little hills blocking the way to the global minimum. Adam is the only one able to find its way to the global minimum. Whichever way the parameters are tuned, from this starting position at least, none of the other methods can get there. This means neither momentum nor adaptive gradient alone can do the trick. It’s really the combination of the two: first, momentum takes Adam beyond the local minimum where all the other balls stop; then, the adjustment from the sum of gradient squared pulls it sideway, because it is the direction less explored, leading to its final victory.

Here is another race. In this terrain, there is a flat region (plateau) surrounding the global minimum. With some parameter tuning, Momentum and Adam (thanks to its momentum component) can make it to the center, while the other methods can’t.
In summary, gradient descent is a class of algorithms that aims to find the minimum point on a function by following the gradient. Vanilla gradient descent just follows the gradient (scaled by learning rate). Two common tools to improve gradient descent are the sum of gradient (first moment) and the sum of the gradient squared (second momentum). The Momentum method uses the first moment with a decay rate to gain speed. AdaGrad uses the second moment with no decay to deal with sparse features. RMSProp uses the second moment by with a decay rate to speed up from AdaGrad. Adam uses both first and second moments, and is generally the best choice. There are a few other variations of gradient descent algorithms, such as Nesterov accelerated gradient, AdaDelta, etc., that are not covered in this post.
Lastly I shall leave you with this momentum descent with no decay. Its path makes up a fun pattern. I see no practical use (yet) but present it here just for the funsies. [Edit: I take my word back about no practical use. Read more about this curve at https://en.wikipedia.org/wiki/Lissajous_curve.]

How I Shipped a Neural Network on iOS with CoreML, PyTorch, and React Native

A Tutorial on Linear Algebra and Geometry ( Part 2)