In this tutorial, we want to open a miniseries dedicated to manifold-based dimensionality reductions tools. So let’s start by understanding what a Manifold is and when it is important without deepening the underlying mathematics.

So Why and When do we need a manifold?

The answer is simple: When linear methods fail

In linear methods (like PCA, MDS) data can only be summarized by a linear combination of features, this means that they cannot discover for example some 1D structures.

Let me show with this figure: 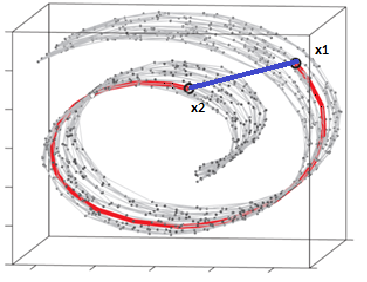 This because our goal is to “preserve local geometry”

The results in essentials in many applications (in computer vision it’s helpful for pose estimation, data compression, image de-noising and missing data interpolation)

So let’s start with the first tools: Isometric feature mapping

This algorithm has three main steps:

All neighbourhood relations are represented as a weighted graph

Where Dy is the Euclidean-based matrix of distances and L2 corresponds to the square of the sum of elements. τ is a function that converts distances to inner products (due to support efficient optimization)

First of all, we have to import packages from scikit-learn

We want to describe the main parameters:

If we want to plot our result:

ISOMAP is a strong tool, but we have to do some considerations. While we can preserve the local structure (local geometry of data) this is an expense of two factors:

This because the functionality of the algorithm depends almost on the choice of the radius. This means that just a few outliers can break the mapping.